In 1917, Chinese students demonstrated in various collective uprisings against the Chinese government’s surrender to the imperial overreach of Western powers who used the Treaty of Versailles to take away land from China. In 1917 China had joined World War I, working alongside the allies with the exception of the German holdings that remained on the Shandong peninsula that then was returned to China as a postwar agreement. Chinese students demanded a cancellation of Japan’s exploitative “Twenty-One Demands” and the return of the Shandong settlements from the Germans. The refusal of these specific demands led to the beginning of the May Fourth movement, when more than 3,000 students marched in the streets and gathered in Tiananmen Square to protest the poor outcome of the Versailles Treaty.

These uprisings began to expand in purpose and audience, including communities beyond students, including both the working-class and merchants. The May Fourth Movement forced the Chinese government to acknowledge these grievances while simultaneously challenging the established meanings of Chinese nationalism.

These uprisings led to the birth of a new intellectual class that worked working to rebuild societal norms and manifestations of culture, such as establishing a  standard vernacular Chinese as the primary language within the country. These changes began to question traditional Confucian ideas while promoting Western ideologies, specifically science and democracy. This intellectual revolution and reform movement, which occurred in China between 1917 and 1921, was directed towards an internal restructuring of national independence, and the emancipation of the individual while institutionalizing these patriotic feelings of reform.

The movement radicalized Chinese intellectual thought, to the point where only two years after the uprising the Communist Party of China was founded, which the KMT part was highly influenced by. The rise of the KMT relied on the communities that had unified throughout the May Fourth movement, specifically the working class, the student masses and the new national bourgeoisie. Acting as an “intellectual turning point in China” this movement laid the foundation for the emergence of several movements like the Kuomintang (KMT) party and other student organizers that simultaneously identify with the privileges of being in Chinese Christian colleges and surviving “in-between” identities. 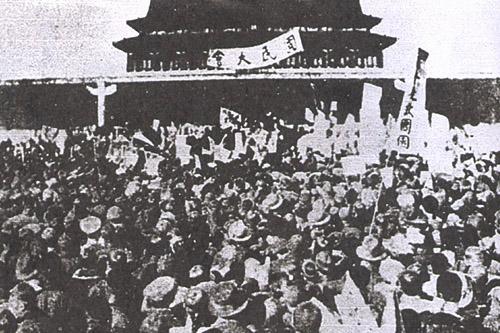 Protesters march against the Treaty of Versailles in Beijing as part of the May 4th Movement
Photograph May 1919.
Prev