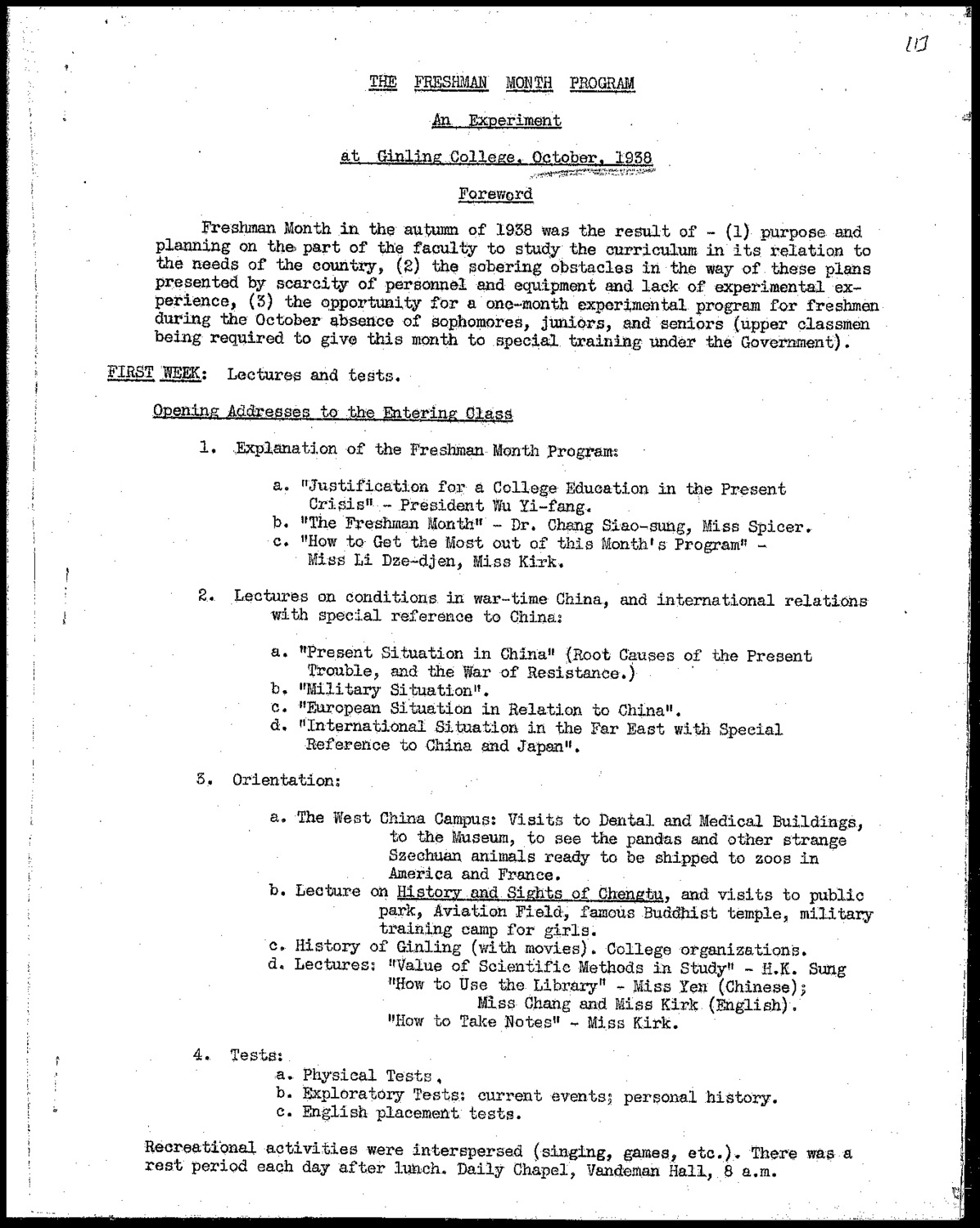 In 1938, plans for a rural service program were put into action with the idea for the Freshman Month Program. This was an experimental month-long project that consisted largely of education through travel into the rural areas around Chengtu, a city in the western province of Szechuan and Ginling’s home during the Japanese occupation of Nanking and World War II.  After the move westward, Ginling used the new location as an opportunity to expose the students to different ways of life in China that they had not yet seen in an effort to push them toward service work. Particularly relevant during wartime in China, this program is proof of the influence of nationalism on Ginling’s curriculum as the administration turned its focus toward helping those less fortunate in China. Half of the month was spent learning about education, economic and social issues, health and recreation, and rural life in China. At the end of the month, the administration spent a week evaluating the experience, getting feedback from the faculty and students, and discussing the future of the project. Ultimately they decided that it was a valuable experience so much so that the program was renewed and extended. 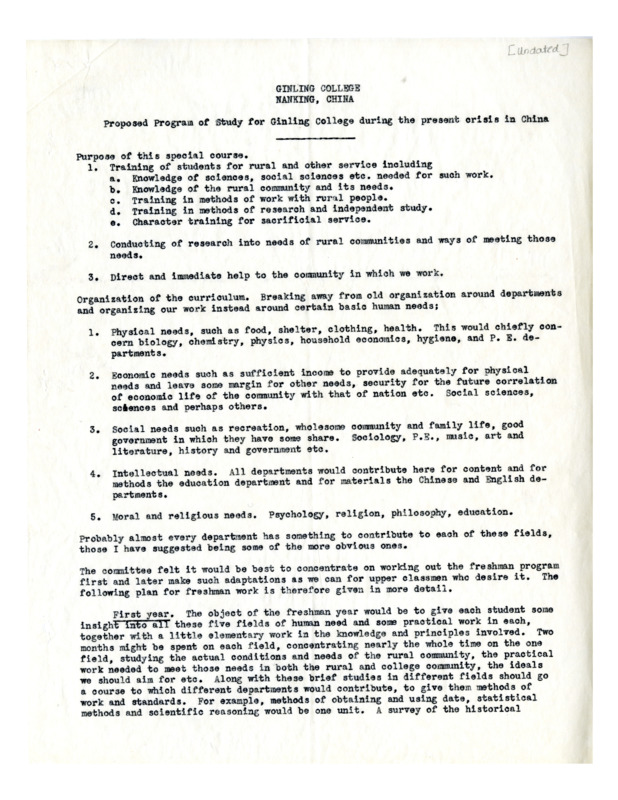 Proposed Program of Study for the Present Crisis
Outline

The Proposed Program of Study for Ginling College during the Present Crisis in China outlines a curriculum for each of the four classes at Ginling beyond the freshmen. Through its expansion, this program shows the direct focus Ginling took toward a more progressive system of rural service education rather than the traditional liberal arts that they had adopted in the college's initial stages. Because it was meant to encompass every year of the students’ experience at Ginling, it seems that the Ginling administration was attempting to continue the service aspects of the initially experimental curriculum and make them a permanent part of the College’s program. 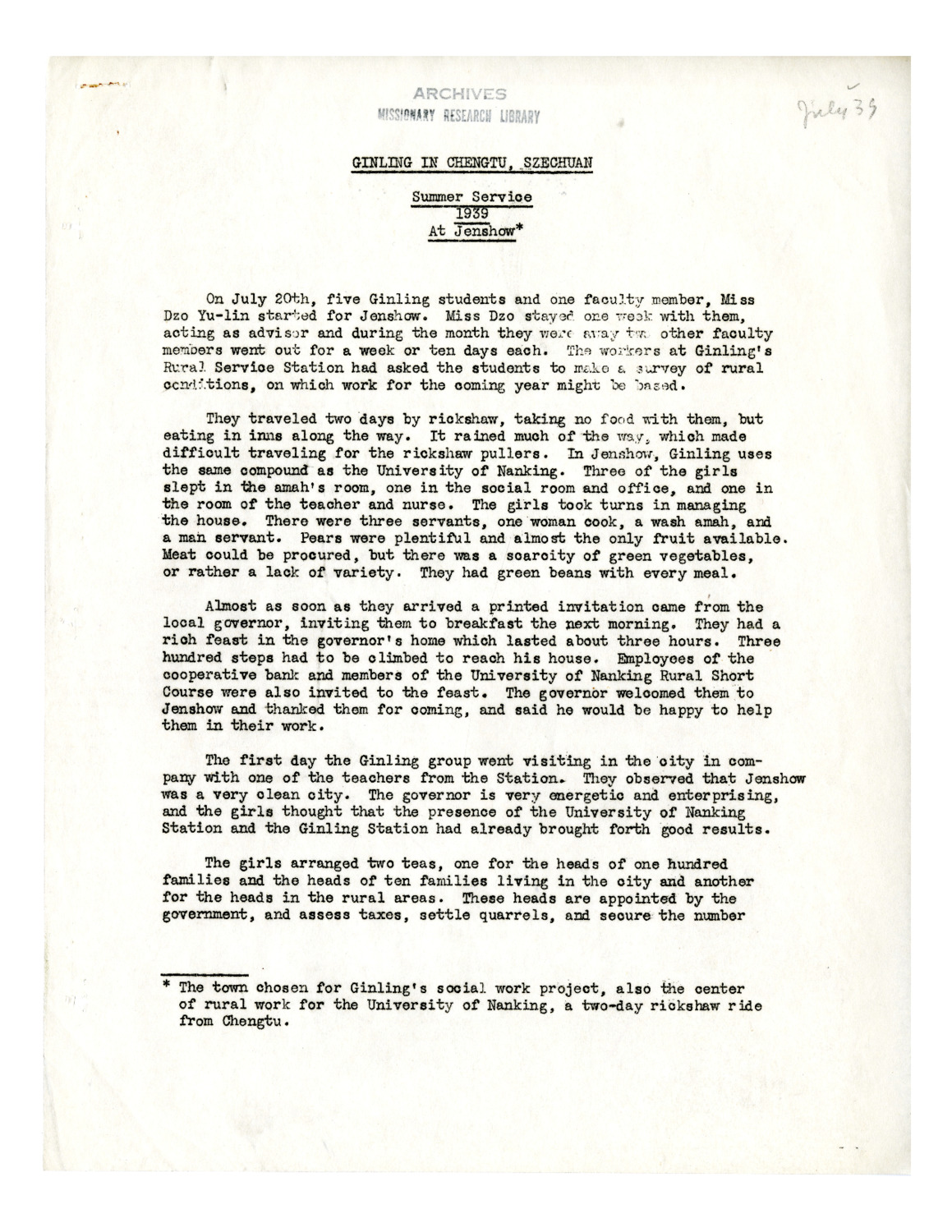 After the Freshman Month Program, Ginling started to open rural service stations around Chengtu. “Ginling in Chengtu: Summer Service” is a report on a trip five Ginling Students and one faculty member, Miss Dzo Yu-Lin (who rotated out with other faculty over the course of a month) took to the city of Jenshow in the summer of 1939. It includes a general account of the trip, quotations from student diaries, and student responses to a brief survey on the needs of the people who live in Jenshow. The intent of this trip was to create a survey of rural conditions upon which the future rural service curriculum would be based, exemplifying the completion of a shift towards rural service-focused curriculum. In addition, the report provides accounts of family visits, gender dynamics concerning home hygiene and class differences, and student perspectives. For example, Ginling students felt like talking to men in families would give them a more accurate sense of the state of life in rural areas. In addition, the Ginling College Rural Service Station had a health clinic that the students volunteered in. The students spoke with many people in Jenshow, including the local governor, important heads of families, and bankers. These perspectives offer insight into how the students of Ginling were forming opinions about rural people in China, and how they used or planned to use their education and knowledge to help advance these people’s lives. Lastly, the report reveals the methods the students used (and/or were taught) to assess rural conditions and their focus on qualitative data (such as family size, income level, etc).