A few years after Ginling’s founding, educational models in China began to shift. There was an influx of progressive educational theory from the United States, along with political unrest that contributed to educational change.

The theory behind progressive education in the United States comes from American education reformer John Dewey. In his 1915 book The School and Society, Dewey addresses the importance of schools as places of community development and reflections of society, rather than just for education.1 He thought that for schools to be effective, they should integrate service and “[provide students] with the instruments of effective self-direction.”2 As these ideas developed and spread in the early twentieth century, a variety of perspectives formed. William J. Reese addresses the diverse definitions of and ideas about progressive education in his article “American Education in the Twentieth Century: Progressive Legacies,” stating that, “Progressivism existed in the eyes of the beholder… progressive education in its broadest sense came to mean the attempt to use the schools as a vehicle of social reform and individual improvement.”3 This focus on social reforms became a primary factor when progressive education spread from the United States to China. The dissemination of progressivism to China happened largely through the work of John Dewey during his visit and lectures at the height of the 1919 May Fourth Movement, an anti-imperialist uprising comprised of Chinese students.4

Broad educational reforms came in 1921 during the seventh national education conference in Guangzhou, when educators put forward propositions to educate common people using republican values, inspired by both Dewey’s progressive ideology and local Chinese realities.5 There was also a shift to teaching in vernacular Chinese, highlighting the fact that in addition to Western influence, the education reforms following the May Fourth Movement were also rooted in nationalist ideals.6 China, whose educational programs had previously been almost entirely influenced by those of the Japanese, looked to incorporate certain Western educational values to create a new hybrid system of learning. In this way, educational development was also a way for China to develop its own identity as a nation.7 Educators such as James Yen implemented the progressive style of education in the form of Rural Reconstruction efforts.8 In the late 1920s, he started the Mass Education Movement in China, going to rural areas and implementing education and hygiene reforms.9 Reformer Tao Xingzhi was also crucial to reform efforts, advocating for “social education” as a nationalistic and economic tool.10 Progressive education eventually came to Ginling in the late 1930s, where educators and administrators such as Wu Yi-fang took up Yen’s cause for rural service and reformed the school’s curriculum.11

Evidence of the changing approach to education can be seen in the commencement speech that Chiang Kai-Shek gave at Ginling in 1934. In it he discusses the importance of continuing the pursuit of metaphysical knowledge, namely religion. He reminds the graduates that they have been given a lot of non-metaphysical, practical knowledge throughout their college careers, but now is the time to turn their focus outward. Citing Jesus and Sun Yat-Sen, he directs the students toward service work, reminding them of the importance of using Christianity to help others and serve the community and the nation. This speech clearly explains Ginling’s goals for educating students to be service workers and to give back to their communities using the tools of Christianity. It also shows some of the nationalist sentiment that was affecting the college and its mission during this time. It focuses on the progressive education at Ginling and nationalism in China. 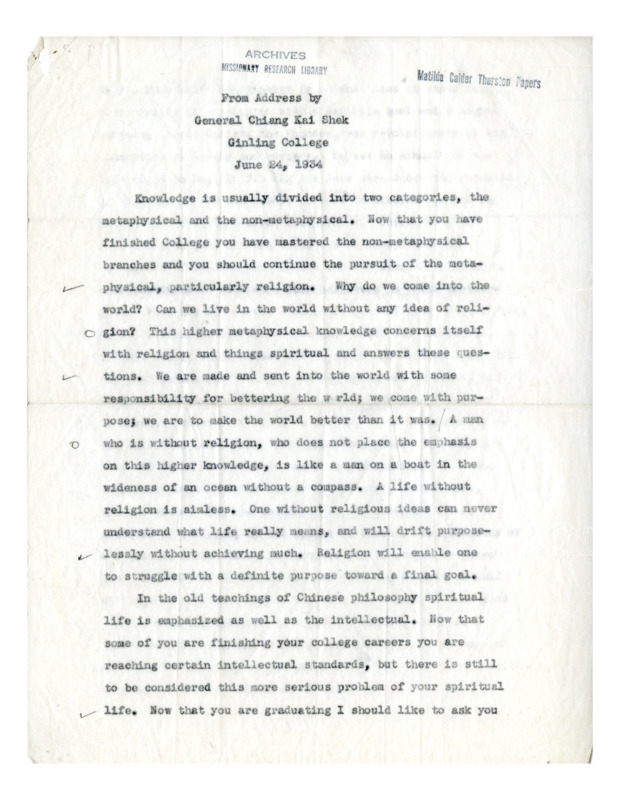 Scholars of women and American religion often identify the interwar years as a period of reckoning and transformation for Protestant churchwomen and the mission boards they worked for. Mission women working during this time, particularly during the turn of the 1920s into the 1930s, had the difficult task of proving their own modernity12 while defending themselves from the skepticism of secular critics and the devolution efforts of their male counterparts, who wanted to abolish sex-segregated missionary boards and as a result, women’s autonomy in missions.13 Conferences and evaluations of all American missions, such as the 1928 meeting of the International Missionary Council or the influential 1932 Laymen’s Foreign Missions Inquiry, were especially vigilant on the topic of “secular civilization,” writing that “it becomes a matter of honor that [missionary] standards… are higher, not lower, than that of secular performance.”14 Seeking “permeative influence” and a “wider Christian fellowship” than what prior efforts could obtain, the authors of these reports urged missionaries to prioritize social work over evangelism. Julia Paxton, a graduate from the missionary training school of the Methodist Episcopal Church South in Nashville, Tennessee, and a missionary of Cuba, represented the evangelism side of “World Friendship,” the replacement of “Woman’s Work for Woman” that assumed united work for peace and friendship as a woman’s mission theory and believed that mission was inherently Christocentric. For Paxton, evangelism contributed integrity when living and spreading the Christian message.15

Indigenous Chinese people, however, particularly the well-educated, the politically active, and the reform-minded, felt pressures to prove China’s modernity, not to further a narrative of Christian civilization, but to strengthen China’s nationhood. As China transitioned from an imperial to various republican governments, most notably under Chiang Kai-Shek, Protestant missions adopted the service-oriented approach recommended by the Laymen’s Foreign Missions Inquiry, producing education programs like the ones instituted by Ginling College. 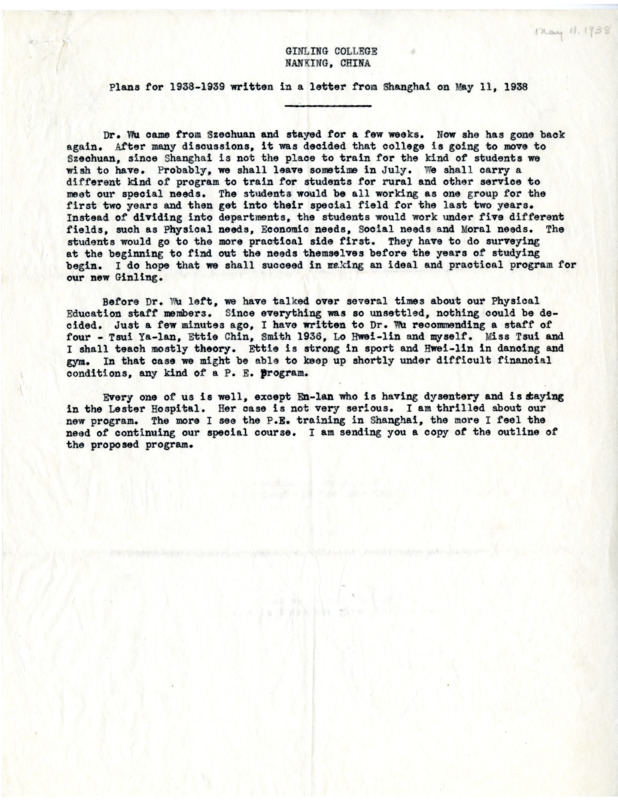 These transformations in education, Chinese politics, and missionary values culminated at Ginling in a shift towards rural service education. We can see the manifestation of this shift in the letter above, which was written in 1938 and discusses the decision for the college to move to Szechuan, the plan to shift the college’s curriculum towards rural service, and hiring new physical education staff. The letter showcases Ginling’s thinking behind the rural service curriculum, as it gives a general but clear outline of the plan to shift curriculum dramatically such that students are focusing much more on practical rural service. In addition, it names possible areas of study, such as “Physical… Economic… Social… and Moral needs.” These areas highlight the goals of progressive education, rural reconstruction, and missionary social service.

1. John Dewey, The School and Society (The University of Chicago Press, 1915), https://archive.org/details/schoolsociety00dewerich, 11.