Liberal Arts education at Ginling College was modeled after the Seven Sisters colleges in the United States, including Smith (Ginling’s sister-college) and Mount Holyoke (Matilda Calder Thurston’s alma mater). This central aspect of the college’s curriculum and mission starkly contrasted with previous standards for women’s education in China. These standards had valued women’s talents and virtue but also emphasized the teaching of domestic tasks as preparation for marriage. Women’s colleges like Ginling offered young women opportunities that had previously been mostly available to male students. Ellen Widmer writes in her chapter, “The Seven Sisters and China, 1900-1950,” that, “Ginling sought to implant an idea at once familiar and quite foreign: that an education not tailored to any specific purpose might benefit female students.”1 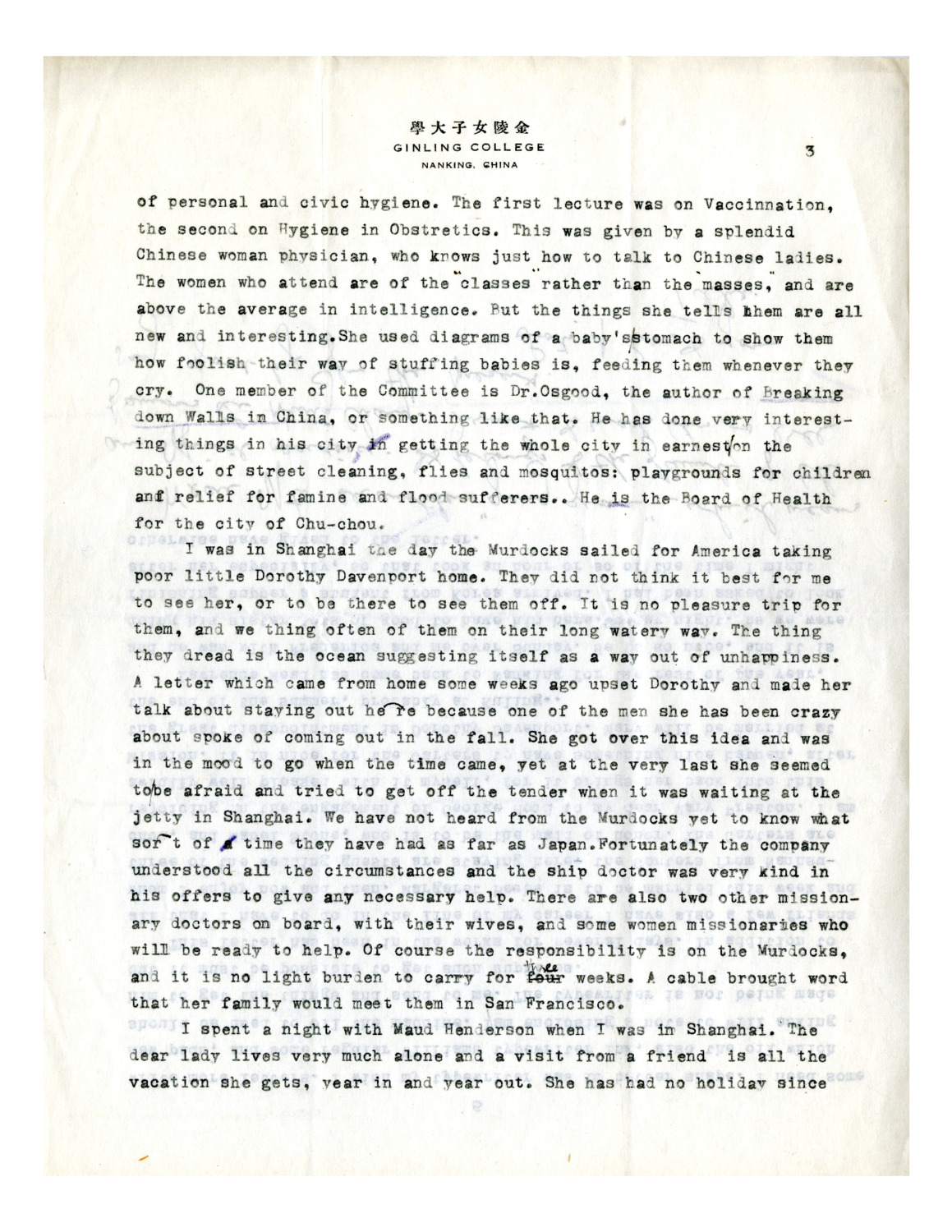 We can see the forging of this new liberal arts curriculum and the influence of Western, missionary ideals in a letter that Thurston wrote to her sister Helen. On page three, Thurston recounts a trip to Shanghai, during which she attended several lectures on “personal and civic hygiene.” In her discussion of these lectures, she states that a Chinese doctor giving the lectures “knew just how to talk to Chinese ladies,” revealing Thurston’s opinion regarding stylistic difference in communication between Chinese women and missionary or Western women. Her admiration for the lectures reflects the values Thurston and other missionaries held concerning health and hygiene, which would play an important role in Ginling’s early curriculum, as we will discuss more below.

On page four of the letter, Thurston mentions meetings she had that were presumably concerned with shaping Ginling’s curriculum. She met Dr. Fong Foo Sec, the editor-in-chief of the English editorial department at Commercial Press, who wrote textbooks for Chinese students learning English. She also met with a Miss Cogdal, the missionary superintendent of Mary Farnham Girl’s School, Dr Kuo Ping-Wen, head of the Nanking Higher Normal School (and later of Nanking University), and the province’s vice president of the Board of Education. Thurston criticizes the Chinese educators’ ideas about college level curricula. She defines Chinese education as antiquated and a style that “foreigners find… something of a problem.” Further, she creates a dichotomy between Chinese scholarship and “modern education,” a field which she sees as synonymous with education in the English language. Thus, at this early point in the life of Ginling College, a significant concern was addressing what missionaries perceived as disparities between Chinese and Western educational standards. For example, Chinese education officials did not recognize degrees from Ginling’s first graduating class, as Ginling had not registered with the government and Western bachelor’s degrees were uncommon in China. As a result, the students’ degrees were only recognized in the United States.2  Such exclusion gives context for Ginling’s decision to incorporate Western educational values into Chinese women’s higher education, a tension that persists throughout Ginling’s history.

A curricular shift of note was the expansion of the college’s physical education program, a process that began in 1925 with a merger between the Shanghai YWCA Normal School of Hygiene and Physical Education and Ginling College. The reason for this change, according to President Thurston and physical education director Emily Case — the architects of the school merger — were two-fold: first, to cut costs, and second (and more importantly), to train physical education teachers properly, extending the physical education program from a two-year to a four-year degree.3 A four-year program would better equip students with the skills they needed to lead the development of Physical Education for women in China, skills that had to be both learned and practiced. Moreover, wrote Thurston and Case, “two years is far too short a period in which to establish… an appreciation of the moral implications of the work and the responsibility for character building which it involves,” such as the “high standards of sportsmanship and an understanding of professional ethics and ideals,” ideals the teachers would spread to students across China.4 To reflect this need, Ginling revised its physical education curriculum to include courses on Western anatomy, hygiene, motor education and pedagogy, physics, dancing, recreation, music, and, most interestingly, "applied hygiene and corrective exercise," the study of “functional disturbances and orthopedic defects, and the principles involved in correcting them.”5 Ginling’s commitment to teaching physical and social hygiene persisted into the 1930s and 1940s, when service education came into vogue.